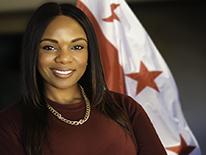 On March 2, 2021, Mayor Muriel Bowser announced the appointment of Lindsey Appiah as Interim Director of the Department of Youth Rehabilitation Services (DYRS).

Director Appiah has been a key member of DYRS’s management team. She helped the agency move multiple initiatives forward and, of particular note, she led the litigation and compliance teams that helped to bring an end to court oversight and monitoring in Jerry M., et al. v. District of Columbia, et al., a 35-year-old class action lawsuit filed in 1985 on behalf of youth in the District’s secure juvenile detention facilities and the District’s oldest consent decree case.

Director Appiah began her legal career in the District as a corporate attorney but her passion for service caused her to pursue a move to government service. In 2009, she transitioned to public service serving as an Assistant Attorney General in the General Civil Division of the Tennessee Attorney General’s Office, where she counseled, represented, and managed a team of attorneys that represented the Tennessee Department of Children’s Services on various matters, including state tort actions and federal civil rights actions.

Director Appiah holds a Bachelor of Arts in Community Health from Brown University and a Juris Doctor from Georgetown University Law Center.

While not a native Washingtonian, Director Appiah feels grateful to call the District her chosen home. She is a proud resident of Ward 1 and is dedicated to serving the city through her involvement with her church and several local organizations supporting some of the most disadvantaged and disenfranchised residents.