The Covenant of Peace 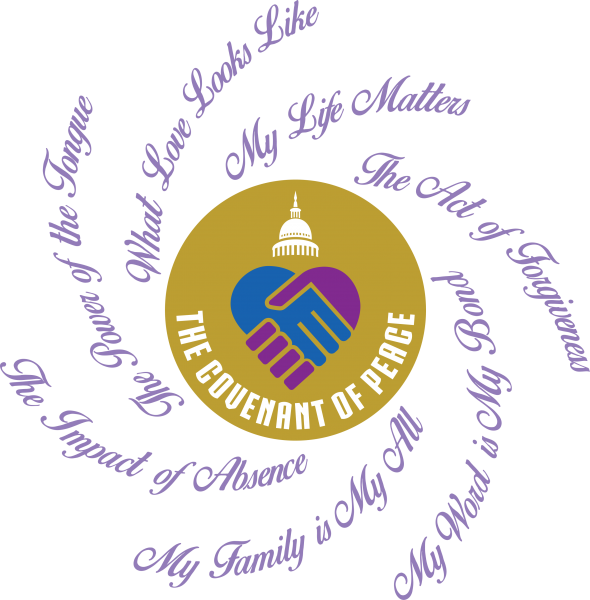 “The Covenant of Peace” is an anti-violence initiative geared at addressing the systemic issues in and around violence. The goal of the Covenant of Peace is to stem the tide of violence in the District of Columbia and beyond by reaching out to the Department of Youth Rehabilitation Services’ committed youth, both in its facilities and in violence-torn communities. After undergoing intense focus groups that explore and challenge the root causes of violence, committed youth at the Department of Youth Rehabilitation Services (DYRS) will sign a “Covenant,” an agreement to abstain from and speak against senseless acts of violence. DYRS and a group of “credible messengers” - a talent of neighborhood-based leaders, individuals with relevant life experiences and proven track records of positive community involvement - will conduct focus groups during a series of “sleep-ins” that begin on a Friday afternoon and culminate the following Sunday. The Covenant of Peace is based on seven pillars to help youth identify where violence begins.

The Covenant of Peace inaugural weekend took place for boys at New Beginnings Youth Development Center from Friday, November 20 - Sunday, November 22, 2015. The second weekend, for young women at DYRS' Youth Services Center in Washington DC, took place January 15 - January 17, 2016. Subsequent events for boys took place in the Spring and Summer of 2016, with the most recent event being in the community at Ballou Senio High School in Ward 8.

More than 70 million Americans - about 1 in 4 - are younger than 18, the age group commonly referred to as juveniles. This age group increased consistently since the mid-1980s and is projected to continue increasing until at least 2015. (US Department of Justice, Office of Juvenile Justice & Delinquency Prevention {OJJDP})

In 2014, youth arrests in the District of Columbia hit their lowest point in the past 10 years…The reason for youth contact with the juvenile justice system was often a non-violent, non-weapons offense…(DC Lawyers for Youth, Youth Arrest and Court Involvement: Trends in DC, 2015).

However, these improvements have been uneven across the city. Stubborn pockets of violent crime remain unchanged in some neighborhoods, particularly in Northeast and Southeast DC. (Urban Institute, Our Changing City, 9/15/15)

The District of Columbia has a unique opportunity to provide rehabilitative services to young people reduce recidivism and increase positive opportunities for youth through “The Covenant of Peace.” The District of Columbia will continue to be a leader in juvenile justice and youth development by enacting the suggested focus groups and programming in the “Covenant,” and by continuing and reinforcing the learnings with booster “Covenant” workshops and programming long after the sleep-in weekends take place.