DYRS was cited for its efforts to connect court-involved young men to their children and families during the holidays in an opinion column published by The Washington Post. The column centered on the agency’s New Beginnings Youth Development Center Holiday Program and Parenting Workshop.

The complete column, written by Colbert King , is available below. 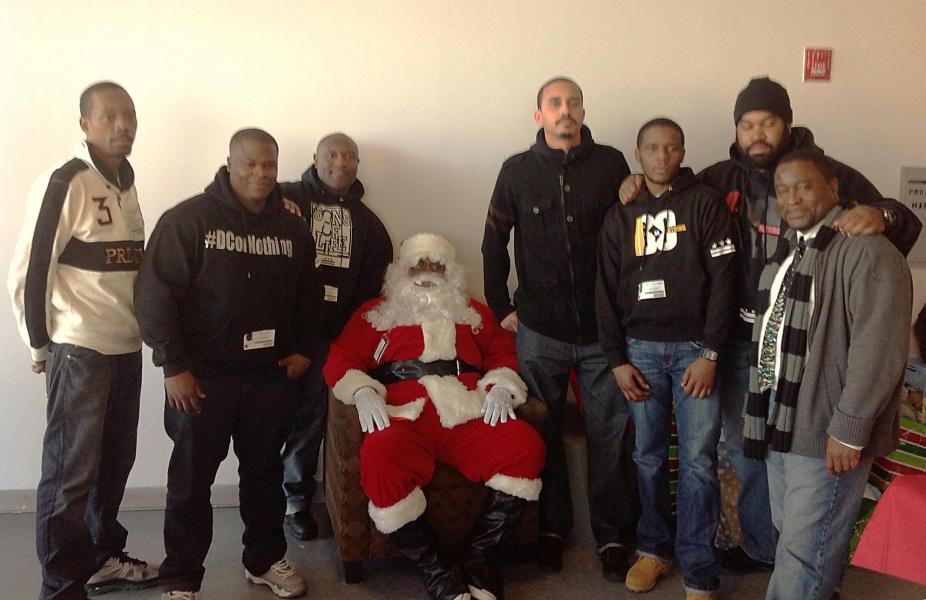 When fatherless young offenders are fathers themselves

By Colbert I. King, Published: December 21

Thousands of children are growing up in this city without fathers.

Yes, many single mothers, also large in numbers, are raising their children to lead productive lives.

But not having a responsible father around to help a child deal with life’s challenges has consequences for families and the community. That’s especially true with boys. Learning how to become a man is hard when there’s no man around to learn from.

Separation from family and community during the holiday season is part of the price those young men are paying for their crimes. But they are not the only ones adversely affected by their incarceration.

Some of those in detention, teenagers for the most part, are also parents. They are the reason some D.C. homes are fatherless — with all that entails for children left behind.

Christmas at the facility could be just another day behind the wall. This year’s holiday observance, however, does bring a difference.

DYRS announced this week that youth “who are fathers will be able to invite their child and three of the visitors from their visitation list to a dinner.”

Santa Claus, too, will be visiting. On Saturday, the announcement said, Santa will bring gifts provided by volunteer organizations and the Maya Angelou Academy, operated by the See Forever Foundation, that the fathers will be able to give to their children.

The young fathers will also participate in a workshop, according to DYRS, “where fathers who are incarcerated will lecture on their perspectives of being an incarcerated child as well as on the incarcerated parent.”

So how many young fathers are in DYRS custody? It’s not clear.

Department spokesman M. Brandon Frazier told me via e-mail: “We actually don’t have a hard number on the number of DYRS committed youth who are parents, although 8 youths have RSVP’d for our holiday father’s event this Saturday and 10 of the 60 youth within the New Beginnings Youth Development Center have self-reported as being fathers.”

An accurate census is difficult to obtain.

Whether an offender is a parent is a “self-reported disclosure,” Frazier told me, so only youths and their case workers are likely to know, and the case workers know only when it is germane to the conditions of the offender’s court-ordered commitment to DYRS. “Verifying such a number would be difficult since it would include multiple agencies submitting information that would increasingly overlap/duplicate,” Frazier added.

And “many times our youth will refrain from disclosing that they have children” for fear of creating “custodial issues” because of their involvement in the juvenile justice system, he said.

Establishing a two-way communication system in which young offenders regard DYRS as a “resource — not a restriction” to helping them, is a department goal, Frazier said.

We can’t leave it at that.

The problem of fatherlessness is too pervasive to be left at one agency’s doorstep.

President Obama said it best in a 2008 Father’s Day speech at Apostolic Church of God in Chicago: “If we are honest with ourselves, we’ll admit that too many fathers are also missing . . . from too many lives and too many homes. They have abandoned their responsibilities, acting like boys instead of men. And the foundations of our families are weaker because of it.”

He might have added that agencies such as DYRS can’t take up the slack.

“You and I know,” Obama said, “how true this is in the African American community. We know that more than half of all black children live in single-parent households, a number that has doubled since we were children.”

What he said in Chicago can be applied to our nation’s capital.

Noting that these children are more likely to have behavioral problems or run away from home or become teenage parents themselves, Obama told the congregation that young men need to be taught that fathering a child doesn’t make them men — that “it’s the courage to raise one” that represents arrival at manhood.

Obama, who was raised by a single parent, said he couldn’t legislate fatherhood or force anybody to love a child. But he left the church with the same message that DYRS is trying to convey this holiday season: “There is no excuse for fathers failing to meet their obligations.”

Filling the hole in a child’s life with love, commitment and unswerving support — that, dear reader, is a chief meaning of the season.