DYRS was recognized for its New Beginnings Youth Development Center basketball program in a news feature broadcast by WUSA9. The segment centers on the how the New Beginnings basketball team allows court-involved youth the chance to use athletics as a rehabilitative tool to learn discipline, teamwork, accountability, sportsmanship and selflessness. 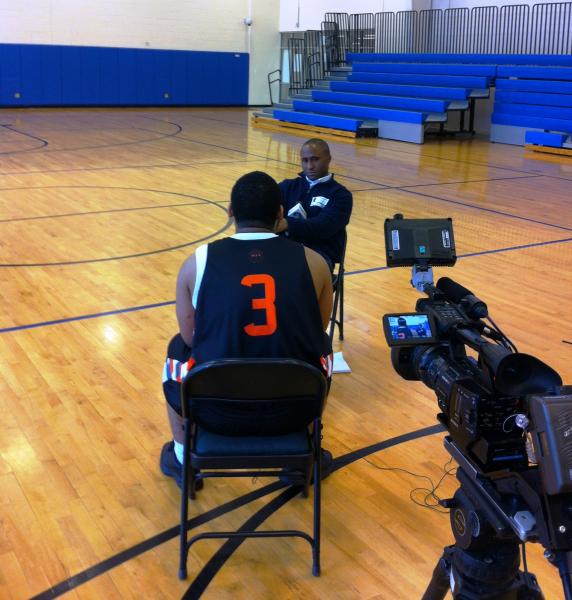 Laurel, Md. (WUSA) -- The ball, the hoop, and the dribbles are just like anywhere else, but the mistakes the players on this basketball team have made might be a little different than others.

In some cases he's talking about felonies. Ellis is part of a District effort aimed at rescuing these youth.

"Our kids are no different than others. Yes they've made bad decisions, but they're here to rehabilitate themselves and improve on that, so why shouldn't they get the chance to play athletics just like everyone else?"

Each week this team, nicknamed the Phoenix to represent an entity rising from the ashes, competes against D.C. Charter Schools, a partnership allowing those who've done bad things an opportunity to do something good.

The school says it's working and points to statistics like a 39% reduction in Re-Arrest Rates, or a near two grade boost in Math and Reading Scores.

The school requested we not release or identify the names of the students interviewed.

The first player we spoke to said: "When I first came down here my attitude was horrible but there were people here who helped me get rid of that attitude," he said. "I'm still working on it, but they're helping me get rid of it."

New Beginnings is located on the same land as the former Oak Hill Juvenile Detention Center in Laurel, Maryland. The facility is a 60-bed, secure facility for committed youth.

"When you're here you're not leaving until you're time is up," says Ellis.

It's an all-day regimen of schooling mixed with vocational and special needs training, and in some cases sports. The basketball games are all home games, and the crowd tends to be very small. Overall, it's an exhaustive effort to help these 60 kids make it.

The second player we spoke to said: "When I go back out there I'm going to play basketball and football. I won't be totally different, but I'll be a better person to stay in school so I can graduate and go to college."