DYRS was praised for its efforts to provide court-involved youth with summer employment and service opportunities in a news feature published by The Washington Post.

The story focused on the agency's Giving Back: One Lawn at a Time Senior Grass Cutting Initiative under DC YouthLink and how court-involved youth are learning the value of helping others, the pride in earning money legally, the tools for being responsible and reliable citizens, and the crucial role that positive adults play in promoting positive youth outcomes.

The full-length feature, written by Robert Samuels, is available below 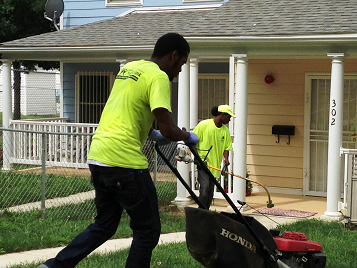 He hated getting up in the morning but loved getting the money, so Ramon willed himself out of bed at 7:15.

Money is hard to come by for the 17-year-old from Anacostia. His first business was drugs. He says he was carrying 80 bags of marijuana last May when police arrested him and charged him with possession with the intent to distribute. After Ramon was convicted, the judge didn’t give him jail time; instead, he gave Ramon a chance at a paying job.

Now he mows lawns for the city’s seniors. From weed seller to weed whacker.

Of the many theories out there for improving outcomes for troubled youth, the city’s juvenile justice system has been testing one in particular: Would young offenders who are given the skills and opportunity to perform paid work return to the streets?

“Young people can change,” said Neil A. Stanley, director of the D.C. Department of Youth Rehabilitation Services. “They do best when they’re close to home, receiving locally based, rigorous supports and services.”

Those now include not only therapy and drug treatment but job-skills training, including, since last year, the paid landscape work in the summer. Stanley thinks the experience with paid work — the first of the legal variety for many, like Ramon — is helping. In 2009, 42 percent of youths who received services outside a detention center were convicted within a year. That number has decreased to 29 percent.

The landscaping program came about after department officials observed a 61-year-old reformed ex-con named Carl Matthews taking young people with him to mow the lawns of elderly residents near the city’s juvenile detention center in Trinidad.

“I was really proud of the work I was doing with them, [although] there were sad parts as well,” Matthews said.

Since the city took it over, the program covers 41 lawns in five wards. The Washington Post is withholding the offenders’ last names because of city confidentiality rules.

The senior citizens view the service as a nice thing to do. But for Ramon, there will be serious consequences if he doesn’t perform well.

If he wants to get his juvenile record sealed, he must prove he understands the meaning of work. That means respecting your boss, working well with peers and showing up on time, even though he hates the cellphone alarm so much that one day he threw it against his bedroom wall.

On this day, he put a white towel and then a baseball cap over his dreadlocks to protect himself from the August sun. Then he put on the camouflage-patterned sneakers he calls his work shoes.

The phone read 9 a.m. by the time Ramon came into the office. About a dozen offenders had shown up to work. They had been convicted on a range of charges — assault, drug possession, robbery — before entering a rehabilitation program that includes therapy, treatment and work training. Many come from poor, single-parent homes in neighborhoods rife with drugs and violence. So they tend to have a lot of emotions bottled up.

Each day, the workers are asked to talk about their feelings.

“I woke up feeling energized,” added Anthony, a 19-year-old who has tributes to fallen friends and family inked on his arms. He joined Ramon and a third landscaper named Stefon.

Rounding out the four-person landscaping crew was their supervisor, 42-year-old Andrew Wilson. He discovered a love for reading and helping others during nearly a decade in prison on an armed robbery conviction. Wilson also knows a thing or two about landscaping, which is helpful because most of the young people he supervises have never cut grass before.

This summer, Anthony mowed himself right into poison ivy. Now the mowers carry calamine lotion in the pickup truck. Ramon had a little difficulty keeping the lawn mower ahead of him, and Wilson had to teach him the importance of control.

But Wilson said he imparts the most important life lessons while criss-crossing between Deanwood and Anacostia in a white pickup, going from lawn to lawn.

“People say, ‘Live today like it’s your last,’ ” Wilson told his crew. “But live like you know there’s gonna be a tomorrow. Consider what your legacy is going to be.”

The crew jumped out and pulled out two lawn mowers and a weed whacker in front of a walk-up brick home off T Street.

Anthony started pushing a mower toward the back yard. ­Stefon started attacking weeds on the sidewalk. In the front yard, Ramon still had some trouble pushing his mower, and Wilson offered pointers. Beads of sweat rained from their foreheads, but they continued mowing.

“This work helps me get my mind off things,” Anthony said. “I have so much anger and pain that my mind needs to be active. If not, I don’t know what I’ll do, and I can’t live like that anymore. I have a daughter now. She’s 1.”

Blades of grass flew into the air.

The whirring sound brought the homeowner to the door. Two years ago, Alice Warren’s husband died of cancer. Since then, the 81-year-old has relied on the kindness of neighbors to cut her grass. “But they have their own lawns to do,’’ Warren said. “These young men do such a good job. It’s such a blessing.”

Before he started mowing lawns, Ramon considered old people “nasty” folks who could sometimes be “disrespectful.”

But mowing the same lawns each week, he and his crew mates have learned to appreciate the quirks of some of their clients. Warren always leans out of her window to thank them. They look forward to visiting the hot dog lady, who always offers them hot dogs.

And then there’s the strawberry lady. “They were so fresh,’’ Ramon reminisced. “I had never tasted strawberries like that before.”

Less pleasant are the trap houses — slang for drug dens, putrid-smelling places where they had to pick up tires and Natural Light beer cans before they could mow.

The solution to avoiding the life inside the trap houses, Ramon thinks, is jobs. The latest labor statistics show one in five in Ward 8 are unemployed. He remembers the euphoria when he received his first $250 check a few weeks ago. He took his brother to Six Flags and treated his aunt, with whom he lives, to dinner at Dave & Busters.

Ramon has no ideal job or big life dream. Right now, he just doesn’t want to get arrested again. He passes his drug tests three days a week. He was a straight-F student last year, but now he has B’s in algebra and English. He tries to pay attention to current events.

“Did you hear how the FBI can look at information on your phones? It ain’t right,” he said to Wilson, alluding to the recent national intelligence scandal.

The crew arrived at the last lawn of the day. When they first started work there earlier this month, the place was so overrun with weeds that they couldn’t even push their lawn mowers through the back yard.

On this day, they would try to make more progress. Stefon, Anthony and Ramon picked up their gear and got to work.

“Seven lawns today,” Ramon pointed out. He looked forward to cutting more tomorrow. The meaning of his work? “I’m getting paid!”